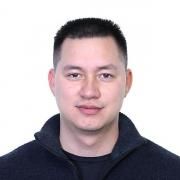 Logvinenko Alexander graduated from KazNTU. KI Satpayev in 2010, specializing in Oil and Gas Business. From 2010 to 2012 Studied at the Master's program at the University of Nancy in France with a degree in Underground Energy Layers: Geology, Hydrodynamics and Modeling. In 2015 he graduated from doctoral studies at KazNTU. From the same year he began his career as a teacher in the department "Development of oil and gas fields." Since 2016, he has been the senior lecturer of the Department of Petroleum Engineering. Logvinenko Alexander repeatedly received a scholarship from Chevron and Kazenergy. In 2011, he personally received the Nazarbayev scholarship from the hands of the head of state. In 2017, he won a research grant from the Foundation of the First President of the Republic of Kazakhstan - Elbasy. He is a finalist of the international competition-accelerator of innovative oil and gas projects "Petroquantum". In 2019, as part of the project “Promoting Productive Innovation”, he received a grant to support research and training of postdoctoral students (PhD). He takes an active part in scientific projects.

2017 - 2018 - "Laboratory studies of the displacement of high viscosity oil by chemical solvents and 3D visualization."

2020 - 2021 - "The selection of the optimal technology for the development of the East Moldabek field."