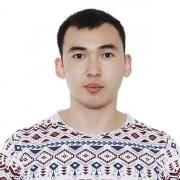 Abdukarimov Aibek  was born on March 13, 1994 in Zhezkazgan, Karaganda region, Kazakhstan. He graduated from secondary school No. 22 of Zhezkazgan. Has a bachelor's degree (BSc Honor Degree) KazNTU im. Satpayev (Almaty, Kazakhstan) and a Master of Engineering (MEng) from the University of Alberta (Edmonton, Canada).

Abdukarimov A.K. He is a lecturer at the Department of Petroleum Engineering, Institute of Geology, Oil and Mining, Satbayev University.

The dissertation work for the master's degree was successfully defended on the topic "The empirical model for predicting the particle settling velocity in viscoelastic fluids based on Wi / Re correlation".

While studying at the University of Alberta, he mastered the following programs for working with drilling fluids: Particle Image Shadowgraphy and Particle Image Velocimetry, MATLAB and others.

He is fluent in three languages; to improve technical English, he took language courses at the University of Toronto (Toronto, Canada). Has the certificate of IELTS-7.0.

Development in the field of drilling fluids, the study of the rheological properties of fluids, the creation of a polymer composition to improve performance during hydraulic fracturing, leaching of sludge and transportation.

Also, the analysis of well testing, interpretation of data, the use of new methods to intensify the flow of oil.

He is currently co-author of the publication “Generalized Models for Predicting the Drag Coefficient and Settling Velocity of Rigid Spheres in Viscoelastic and Viscoinelastic Power-Law Fluids” in the journal Journal of Petroleum Science and Engineering CiteScore: 3.66 Impact Factor: 2.886.

September 2017 - May 2019 Master of Engineering in Petroleum Engineering, University of Alberta, Edmonton, Alberta

September 2016 - March 2017 Capstone Project: “The empirical model for predicting the particle settling velocity in viscoelastic fluids based on Wi / Re correlation”