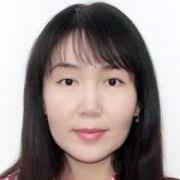 Institute of Metallurgy and Industrial Engineering

Tulegenova Aida was born on October 4, 1988. In 2006, she received an educational grant at the al-Farabi KazNU to specialty Materials Science and Technology of New Materials at the Faculty of Physics and graduated from the bachelor's degree in 2010. In 2011 she entered the master to the al-Farabi Kazakh National University to the Faculty of Physics and Technology on specialty Physics. Wrote a dissertation work on the topic "Investigation of the heat transfer of the wing airfoil NASA-0021 at different speeds and angles of attack" under the supervisor of Ph.D., R.K Manatbaev and defended herself for an excellent mark. He has more than 35 more publications in journals from the list of the Higher Attestation Commission of the Russian Federation, CCES RK and in journals indexed in the international scientific citation systems Scopus and Web of Science. Tulegenova A.T. worked as a leading specialist in the Office of the Registrar of the Physics and Technology Faculty "Department of Academic Affairs, Al-Farabi KazNU " since September 2012. Since 2013 she has been working as a teacher at the Department of Solid State Physics and Nonlinear Physics of the Faculty of Physics and Technology

Over the past five years, he has been the executor of the following grant projects under the grant financing program of the Ministry of Education and Science of the Republic of Kazakhstan for fundamental and applied research in priority areas for the state: ““ Rational use of natural resources, including water resources, geology, processing, new materials and technologies, safe products and structures ":