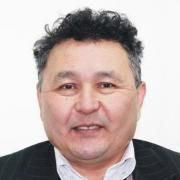 Candidate of geological and mineralogical sciences

Doskhozhaev A.S. began his professional career in 1984 at the Institute of Hydrogeology and Hydrophysics of the Academy of Sciences of the Kazakh SSR as an engineer, then a senior researcher, and later worked as head of the laboratory until 1991. And from 1991 to 2019 he worked as a senior teacher, associate professor, associate professor of the Department of Hydrogeology and Engineering Geology at KazNRTU named after Satpayev K.I. From May 2019 to the present, he has been working as an assistant professor at the Department of Engineering Systems and Networks of Satbayev University.

Water supply of cities and towns, mining technologies: gold, diamonds and other precious metals, as well as building sand from sediments of mountain rivers of the northern slopes of Zailiysky Alatau. Under the guidance of Professor Doskhozhaev A.S. 2 candidate, 1 doctoral, 3 master's theses are defended.

He worked as a contractor in 2 research projects on technological uranium mining due to leaching at the Institute of Hydrogeology and Geoecology named after U.M. Akhmedsafina of the Ministry of Education and Science of the Republic of Kazakhstan (leader Makhmutov T.T.)

2)1987 - 1990 years. - Moscow, Institute of Water Problems of the USSR Academy of Sciences, full-time graduate school. Candidate of Geological and Mineralogical Sciences since 1991.