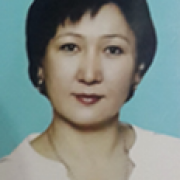 KazNTU named after K.I. Satpayev has been working since December 2006. Until 2010 she worked as a master of the highest level of qualification of the Department of General Geology, Mineralogy and Petrography of the Geological Exploration Institute. From 2010 to 2012 she worked as an engineer, and from 2012 to present I combine work in the K.I. Satpayev IGN with teaching activities at the Department "Geological Survey, Search and Exploration of Mineral Deposits."

In 2016, she held a foreign scientific internship in the mineralogy department of the Natural Science Museum in London (January 2016, December 2016). The research and internship resulted in presentations at international conferences in Miass, Russia, Dublin, Ireland, Bristol, United Kingdom.

In 2016, she participated in the international conference "MDSG (Mineral Deposits Studies Group)" in Bristol, UK, where she presented a bench report on the results of her research works and was awarded the "Best MDSG Report -2017" certificate and a monetary prize.

2015-2017 MNS - Executive Officer of Grant Program of MES of Kazakhstan "Creation of Database on Unique, Rare and Insufficiently Studied Minerals of Deposits of Noble and Rare Elements of Kazakhstan for Complex Development of Mineral Raw Materials".

2015-2017 Mineralogist - performer of grant program "Carrying out search works on detection of gold, copper, polymetals within Umshil and Schotskaya sub-zone."

From 2010 to 2012 Kazakh National Technical University named after K.I. Satpayev. In the specialty 6M070600 "Geology and Exploration of Mineral Deposits," Master of Technology and Technology.