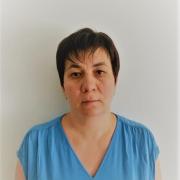 Qualification - a teacher of English Language and Methods of Forein Languages Teaching with experience of 25 years. Winner of the “Best Teacher of the Year” (2016) awarded by Ministry of Education and Science of the Republic of Kazakhstan. I began my pedagogical activity in 1995 as an assistant of the English language department at KazUIR&WL named after Abylai Khan. In 2000, I became a full-time teacher of the Department of English at the same university. In 2007, I received the degree of “Cndidate of Pedagogical Sciences”. Since 2010, I had been working as a senior lecturer at the Department of Foreign Language Education Techniques. In 2015, I got the title of Associate Professor of the Department of Foreign Language Education Techniques at the KazUIR&WL named after Abylai Khan. Since 2018, I have been working as an Associate Professor of English Language Department at Satbayev University.