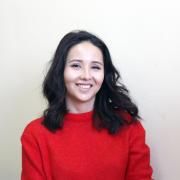 In September 2009, she entered the Kazakh National Technical University. K.I. Satpayev, specialty "Geology and exploration of mineral deposits." During her undergraduate studies under the program of academic mobility of students, she studied at the University of Aveiro, Portugal for one semester, where she was engaged in a scientific project in the Schlumberger laboratory under the guidance of Professor L.M. Pinheiro. Also, for her academic success for three years, she was awarded scholarships named after the First President of the Republic of Kazakhstan, the Chevron company for technical specialties.

At the end of the undergraduate entered the magistracy of KazNITU. K.I.Satpayev specialty "Geophysical methods of prospecting and exploration of the field." She completed a research internship at the University of Lublin, Poland.

She began her career while studying for a master's degree, at Ken-Sary LLP / Korean National Oil Company, where she worked from 2013 to 2014 as a geologist.

From 2014 to 2019, she worked at NPC Geoken LLP as a geophysicist engineer, where she was engaged in maintaining geophysical databases and systematizing.

In 2015, she entered the doctoral program at KazNITU. K.I.Satpayev, where under the guidance of Professor A.E. Abetova is working on her dissertation “Geological structure and prospects of oil and gas potential of Jurassic deposits of the North Ustyurt region”, she also completed a research internship at the Russian Academy of Sciences under the supervision of Dr. M.A. Yu.A. Volozh.

I have written a number of articles in journals with a high impact factor included in the Higher Attestation Commission, participated in various scientific and practical conferences in Moscow and Tashkent.

Abetov, A. Niyazova, A. Saurikov, Z. 3d modeling of euler’s points for geodensity and geomagnetic models of north ustyurt region in geosoft oasis montaj. News of the National Academy of Sciences of the Republic of Kazakhstan, Series of Geology and Technical Sciences. 2017 | journal-article