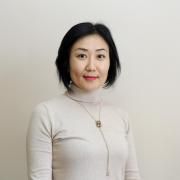 Senior-lecturer of the English Department at Satbayev University with 13 years of experience. I am the author of over 10 publications and 1 textbook in the field of cognitive linguistics, literary studies and intercultural communication. I had an internship at the University of Passau (Germany), studied under the academic mobility program from 2014 to 2015.

I began my career in 2005 as a teacher of the English Department of Grammar at the Kazakh Ablai khan University of International Relations and World Languages.

In 2018, for a total of 240 hours, I completed advanced training courses at the JSC National Center for Advanced Studies ‘Orleu’ and AEO ‘Nazarbayev Intellectual Schools’.

I regularly take part in updating materials on the university educational portal for students’ independent study, as well as in the preparation of module exam tests and materials for the discipline ‘Professional English Language’. Every year I participate in methodological seminars, online courses, webinars and conferences, publish articles in our local and foreign editions.

1. The interaction of East and West in the single space-time continuum of a literary-novelistic discourse (in S. Rushdie’s novel “Midnight’s children) Kazakh Abylai khan university of International Relations and World Languages, “Bulletin”, 2015year

5. The urban concept “Petersburg” in the aspect of the implementation of the central concepts in F.M. Dostoevsky’s novel “Crime and Punishment”, Pyatigorsk State University, Issue 4, 2018

6. Urbanistic cognitive matrix of Petersburg in focus on the realization of the main concepts in F.M. Dostoevsky’s novel “Crime and Punishment”, Abstracts&Proceedings of Socioint 2019- 6th International Conference on Education, Social Sciences and Humanities, 24-26.06.2019 in Istanbul, Turkey, Istanbul, Turkey. (Thomson Reuters).