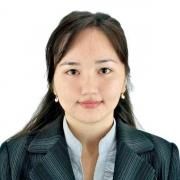 From October 2016 to the present, I have been working as an assistant in the English language department at Satpayev University.