If the pieces and the votes all fall into place, Denis Ten just might compete in the 2018 Winter Games in South Korea, his ancestral home, and in the 2022 Winter Games in Almaty, Kazakhstan, his home city.

But for now Ten’s focus is much more short term: this week’s world figure skating championships in Shanghai.

At age 21, he already has a surprise silver medal from the 2013 world championships and a bronze medal from last year’s Winter Olympics in Sochi, Russia. But this sensitive, curious, border-blurring talent — who can both feel the music and land quadruple jump after quadruple jump — is now in fine position to fly higher and secure his first gold at a major global event.

“I think he’s definitely ready,” said Evan Lysacek, a former world and Olympic men’s champion from the United States who has been one of Ten’s measuring sticks and mentors.

But Ten’s primary influence at this stage remains Frank Carroll, the same California-based coach who once helped the driven Lysacek and the graceful Michelle Kwan become the best in the world.

“He works too much,” Ten said of the 76-year-old Carroll in a recent interview. “He’s on the ice from 7 a.m. until, like, 5 p.m. That’s crazy for his age, and I always ask him if maybe he should take a day off. But I think he’s such a fan of figure skating. He puts so much effort in it, and he’s always there for you. But most of all he’s a talented coach. As Evan says all the time, Frank is a genius, and I think that’s true.”

Like many modern figure skaters, Ten has had to travel far from his beginnings to explore the boundaries of his talent. Born in Almaty into a family that is part of Kazakhstan’s sizable Korean minority, he started to skate while bundled up at an outdoor rink. In need of expert coaching, he moved to Russia to train in the Moscow area at age 10 with his mother, Oksana, leaving his father and his brother behind in Almaty.

Dissatisfied with his progress, Ten shifted his base to Southern California in 2010 after he and his mother met with Carroll at the world championships that year in Turin, Italy. Carroll knew that Lysacek was about to retire. Ten asked for his help before others had a chance to do so, but Carroll was well aware of his gifts.

“I had watched him with Evan when Denis had come to visit and train in L.A. with his Russian coach,” Carroll said. “Evan said to me: ‘Frank this kid is amazing. Frank, you have to look at this kid. He has talent coming out his ears.’ ”

Lori Nichol, the Canadian choreographer who has long collaborated with Carroll, has become one of Ten’s muses.

“The way his blade touches the ice and the way he moves his body through space on the ice is highly individual,” she said. “And his passion is not just throwaway passion. It’s this really deep, profound passion, and when he lets it out, I’ve been reduced to tears in practice sometimes because, oh, my God, I get blown away. I’ve worked at a high level and never seen anyone like it.”

But there is a flip side.

“That level of intelligence can also be a weakness in that he gets too intense and he brings himself down because nothing is ever perfect enough,” Nichol said.

Ten’s English, halting at first, has begun to flow nearly as smoothly as his skating. He answers queries in long paragraphs, not clipped sentences, and takes particular delight in discussing his maternal great-great-grandfather Min Geung-ho, a Korean general and war hero who died in 1908 while fighting the Japanese.

Ten said his ancestors had been forced to flee Korea, first to China and then to Russia, where they and others of Korean descent were eventually uprooted en masse from the east in the 1930s by the Soviet authorities and made to relocate to present-day Kazakhstan — then a Soviet republic — in often harsh conditions. 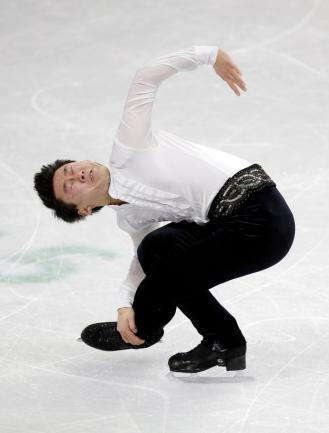 Ten's "level of intelligence can also be a weakness in that he gets too intense, and he brings himself down because nothing is ever perfect enough," the choreographer Lori Nichol said.

Ten said that his mother was born in the region and that his father, Yuri, was born in present-day Ukraine before moving to Kazakhstan, which declared independence in 1991 after the dissolution of the Soviet Union.

It is a sprawling, continent-straddling, landlocked nation, the ninth-largest country in the world, with a population of about 18 million that is estimated to include more than 100,000 ethnic Koreans.

Despite his pride in his origins, Ten said he spoke little Korean or Kazakh and was instead most comfortable in Russian, which is an official language in Kazakhstan. He is also studying English as he pursues a business degree at the Kazakh-British Technical University in Almaty.

An international approach could come in handy if Almaty succeeds in landing the 2022 Winter Olympics. It is one of just two candidates, although Beijing, the host of the 2008 Summer Games, is considered the early favorite in a race that will be decided when the International Olympic Committee votes in July.

Ten, the first Kazakh to win a world or Olympic medal in figure skating, is part of the Almaty 2022 bid team and praises his city’s compact plan and enthusiasm. He has already won a gold medal in Almaty, taking the title there at the 2011 Asian Winter Games.

“Our people, they love sport,” he said. “They are more into summer sports, and we were quite good at the London Olympics, but I’m sure that if we win the Winter Olympic Games, then people will be more motivated to do winter sports and they will be more interested.”

It is far from certain that he will still be competing in 2022. He would be 28 during the Olympics, in a discipline in which the years add up quickly. But Ten does plan to skate until at least 2018 and the Winter Olympics in Pyeongchang, South Korea.

Clearly, performing in what he calls his “second home country” agrees with him. Last month in Seoul, he won the Four Continents Figure Skating Championships, his first International Skating Union A-level title, in grand style. His combined total from his short program and free skate was 289.46 points, the third-highest mark in men’s history.

“Just a huge statement to make,” Lysacek said Tuesday in a telephone interview. “Not to put added pressure on him, but that’s such a difficult score to even match. If he can match that at the worlds, I doubt anyone is going to challenge him.”

There are, without doubt, major challengers: above all, the reigning Olympic and world champion, Yuzuru Hanyu of Japan, who has struggled to stay healthy this season, and the European champion, Javier Fernández of Spain.

But Ten, routinely a slow starter in the season, appears to have acquired a new layer of polish and a new level of confidence, even if there have still been obstacles: visa issues and the usual struggles with his skates and equipment exacerbated by his unusual feet. (“They do not sit flat on the ground like normal feet,” Carroll said.)

There also have been concerns about Ten’s father’s health, which, Carroll said, has required Ten to return to Almaty more frequently than expected this season.

“I think he’s a very sensitive boy, and with that sensitivity comes sometimes a little bit of timidity,” Carroll said. “I just hope that he’ll be on fire when he competes and that he will be impressive and not hold back.”

Ten certainly was inspired when he skated in Seoul. His short program features the vocal music “Caruso” by Lucio Dalla. His free skate’s theme is the Silk Road, as appropriate for a Kazakh long ago as for a modern-day globe-trotter like Ten.

“By coincidence I was born on the Silk Road, and the name of the street where my home was actually means ‘silk way’ in Kazakh,” he said. “It’s a cool story, and I feel myself like I’m a nomad who explores the world and explores the silk way and gets his life experience through it.”

The question in Shanghai is whether that path — after all the growth and discovery but also all the separation and sacrifice — leads to gold.