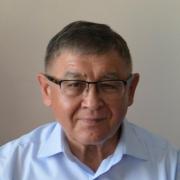 Since 1988 he has been working in the newly organized design institute "Almatygenplan", as head of the master plan workshop, and since 1990 - as deputy director for urban planning issues.

In 1991 he was appointed deputy chairman of the Committee for Architecture and Construction of the Almaty Regional Administration.

Since 1995 he has been working as the head of the Almatygosgradkadastr Office at the Department of Architecture and Urban Planning of the city of Almaty. During this period, the creation of the pioneering system of the state urban planning cadastre of the city of Almaty begins.

In 1998, the development of a new master plan for the city of Almaty began, on which he worked as the chief architect of the project until 2000.

From 2001 to the present time he has been working as a director of the limited liability partnership "Design firm" GRADO "(Almaty).

In 2013, Mametov Arkinzhan Akhmetzhanovich was elected a professor, in 2017 - a corresponding member, and in 2018 a full member (academician), a member of the Academic Council of the International Academy of Architecture (branch in Moscow).

- Jubilee medal "10 years of Independence of the Republic of Kazakhstan" (2001).

- Anniversary medal "20 years of Independence of the Republic of Kazakhstan" (2011).

- Jubilee medal "25 years of Independence of the Republic of Kazakhstan" (2016).

- For a great contribution to the development of architecture and urban planning A.A. Mametov awarded with the badge "Honorary Architect of the Republic of Kazakhstan".

- He is the head of the development of planning projects for the suburban area of ​​the city of Shymkent and the city of Ust-Kamenogorsk.

- Over the years, he took part in the development of legislative acts: on the land tax, the land code, on architectural, urban planning and construction activities in the Republic of Kazakhstan, a number of guidance documents in the field of construction (RDS, SNiP).

1. Some aspects of development of large cities of Kazakhstan on the example of Shymkent. And Abilov And Mamedov, W Pockets. Architecture. Construction. Design, No. 2, 2015. Pp. 20-25 2. The urban development of Kazakhstan in the context of global challenges. A. Zh. ABILOV, A. A. MAMEDOV, Y. H. AIBASOV. BULLETIN. ARCHITECT OF THE 21ST CENTURY. Zodchiy Publishing House (Saint Petersburg), No. 1, 2016. Pp. 15-18.