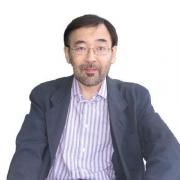 Almaz Mustafin is a Professor in the Department of Engineering Physics at Satbayev University, where he has been since 2007. He was born in Karaganda, Kazakhstan, on May 17, 1955. In 1972 he finished a public school specializing in physics and math. He received an engineer’s degree (Dipl. Ing.) from the Moscow Institute of Physics and Technology in 1978, and a Candidate of Physico-Mathematical Sciences (=PhD) from the M.V. Lomonosov Moscow State University in 1984. He defended his habilitation doctoral degree in 2001 at the Institute of Mathematics, National Academy of Sciences, Almaty, Kazakhstan. From 1978 to 1980 he was a Graduate Research Trainee at the I.E. Tamm Theory Department, P.N. Lebedev Physical Institute, Russian Academy of Sciences. From 1984 to 2001 he worked first at the Institute of Mathematics and Mechanics and then at the Space Research Institute, National Academy of Sciences, Almaty, Kazakhstan, eventually as a Lead Scientist. From 2001 to 2007 Dr. Mustafin taught physics and related subjects in United States, at the George Washington University, Washington, DC, and the University of Maryland, College Park, MD. In 1994 he became one of the grantees of the George Soros International Science Foundation. In 1995–1996 he was awarded the International Fellowship for Research in Japan by the Japan Society for the Promotion of Science. Prof. Mustafin is a member of the American Physical Society (2006–) and the Society of Industrial and Applied Mathematics (2018–). Erdős number 5.

The notable publications of Prof. Mustafin are available at the ResearchGate: https://www.researchgate.net/profile/Almaz_Mustafin