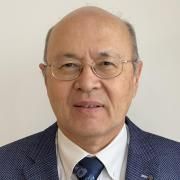 Doctor of Physics and Mathematics

Department of Management and Mathematical Economics

Kairat Mynbaev was engaged in research and taught in Kazakhstan (Institute of Mathematics and Mechanics, KIMEP, Kazakh-British Technical University, Satbaev University, KazNU), in Brazil (federal universities of the states of Roraima and Ceara), in the USA (University of California, Riverside, and University of Colorado, Boulder). He makes an important contribution to the improvement of research potential by teaching statistics, econometrics and finance, as well as to the development of probability theory and mathematical statistics in the Republic of Kazakhstan, leading doctoral students at KazNU named after Al-Farabi. The first scientific studies of Mynbaev K.T. relate to the function theory and functional analysis. Some of his results were published in a joint monograph with M. Otelbaev, published by the Moscow publishing house Nauka in 1988. For the past two decades, he has been working in probability theory and statistics. His 2004 textbook on Econometrics published in Brazil and Kazakhstan is important for the development of econometrics as a mathematical science in Kazakhstan. His monograph on probability theory and statistics, published by the American publisher Wiley & Sons in 2011, is a confirmation of his recognition by the international scientific community. He also published in the USA a textbook on the basics of statistics (2015). He has a website https://raisingthebar.nl/ with various study materials in statistics, econometrics, optimization theory and finance. He is a member of the editorial board of the Eurasian Mathematical Journal and the Kazakh Mathematical Journal.

2) 1978-1981 - graduate school at the Institute of Mathematics and Mechanics of the Academy of Sciences of the Kazakh SSR, specialty "Mathematical analysis". Academic degree - candidate of physical and mathematical sciences.

3) In 1991, at the Institute of Mathematics and Mechanics of the Academy of Sciences of the Kazakh SSR, he defended the dissertation of a doctor of physical and mathematical sciences with a degree in mathematical analysis.

1) Grant “Estimation of discontinuous densities and distribution functions in relation to applications in economics, finance and insurance” AP05130154 through the Ministry of Education and Science of the Republic of Kazakhstan, term 2018-2020.