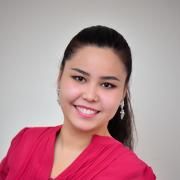 Master of Science in Arts

She started her practical activity already during her studying in the specialty, working in the production in the design firm "Bastauks" LLP as an architect (working drawings, specifications of elements, finishing sheets, sketching of project proposals, etc.), 2008. Participated in the design of objects for the 7th Asian winter games in Almaty "ski base Shymbulak", "cable car Medeo-Shymbulak". From 2014 to the present time she is an employee of the Satbayev University, where she works as a tutor of the Department "Architecture". She is the author of more than seven scientific articles and seven books in the field of ornament: "the Secret of ornament", "the Secret of ornament II", "the Secret of ornament III", "the Secret of ornament IV", "Tabigat syyy", "Tabigat syyy II", "Dongelek Oyu-Ornek Alemi". She has participated in various international conferences, making presentations.  At the moment, works as a practicing architect, who has author's projects put into operation in Almaty and Nur-Sultan. The result of the work is participation and joint work with the company "Acciona Producciones y Diseño", which is a contractor of SEMBOL company: it was engaged in the construction of the Museum exposition of the SPHERE pavilion and, in particular, the national Pavilion of Kazakhstan EXPO-2017, as well as participation in various events.  Ospanova K. H. is the founder of important research areas in the application of ornament in architecture of Kazakhstan, having both theoretical and applied value, where is the winner of the prize Fund of the First President of the Republic of Kazakhstan – Elbasy for achievements in the field of culture and art. She is a certified user of Autodesk programs (Revit, Civil 3D) Ospanova K. developed personally and co-authored with colleagues at the Department of new courses related to information modeling. 09.01.19 g-11.01.19 g successfully conducted a refresher course Winter school "BIM in architecture and construction" for faculty of the Department "Architecture" and invited guests.

1 "Ornament in architecture of Kazakhstan" Materials of the international scientific and practical conference "Actual problems of the big city: architectural theory and practice".  No. 1(1) / 2013. – Almaty.: "Higher school of Kazakhstan", 2012. - Pp. 35-39.,

4 "Formation of own ornamental compositions in the monumental art of Kazakhstan" Proceedings of the International scientific and practical conference "Architecture and construction in the conditions of global integration" KazNTU named after K. I. Satbayev 2015. - Pp. 74-81

5 "Brief historical review of ornament in the architecture of Kazakhstan" Proceedings of the International forum "Engineering education and science in the XXI century: problems and prospects", dedicated to the 80th anniversary of KazNRTU named after K. I. Satbayev 2014. "Volume III. - Pp. 234-241

6 "Domes and vaults of Islamic religious architecture" international Satbayev readings-2016  "Competitiveness of technical science and education", dedicated to the 25th anniversary of independence of the Republic of Kazakhstan Volume II. Pp. 538-544

7 "Modern aspects and anaysis of usage of ornament in architecture of Kazakhstan” Russian Journal of Construction Science and Technology, 2016, Ural Federal University, Construction Institute. The article was sent for publication with an impact factor