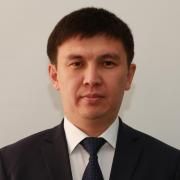 After successfully graduating from university, in 2001, having received the qualification of an electrical engineer, at the invitation of the department, he remained in the position of assistant to the department of "Power Supply".

In 2001, he was sent for a one-year internship at the Kazakh National Technical University  after K.I. Satpayev.

In 2002, he entered full-time postgraduate studies in the specialty 05.13.06 - Automation and control of technological processes and production of the Kazakh National Technical University named after K.I Satpayev.

From December 3, 2005 to June 30, 2016, he worked as a teacher and senior teacher at the Department of Electric Power and Automation of Technological Complexes of the Kazakh National Technical University named after K.I Satpayev.

From September 1, 2016 to September 11, 2018 worked as an assistant, lecturer, assistant professor at the Department of "Power Engineering" Satbayev University.

From September 11, 2018 to the present, the head of the Department of "Power Engineering'' at Satbayev University.

He was the executor of a scientific project in the framework of state grant financing for 2012-2014. on the topic No. 747 MSE.SF.12.14 dated 2.03.2012, “Temperature control of current-carrying and contact surfaces of elements of electrical equipment of technological complexes”.

In the period 2008-2011 He was the executor of a joint project of KazNTU named after K.I. Satpayeva with the European Union to develop the TEMPUS IV Master's Program in Masters in Energy and Sustainable Development.