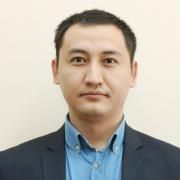 At the end of the bachelor's degree in 2011, he entered the magistracy, is a two-time holder of the Chevron scholarship for technical specialties.

From 08.2013 to 02.2015 he worked as an electrician for the repair and maintenance of electrical equipment of 4 categories at ATKE LLP.

From 08.2018 till now is a lecturer at the Department of «Power engineering».

Conducts research in the following areas:

- Improving the converters of wind and solar energy into electrical energy;

- Development of an effective system for identifying a control object according to a passive experiment in an adaptive automatic control system.