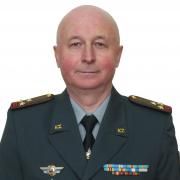 Senior teacher of the Fire Control and Battle Work of Artillery cycle, Colonel of the reserve