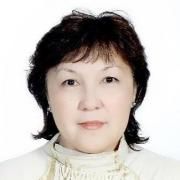 She worked as an assistant and then as a teacher at the Department of "Drawing" in KazHAAC, led fine arts disciplines, and also engaged in the souvenir business. Has an author's certificate for the object of intellectual property (Registered in 1995.)  Since 2004, he has been working at KazNRTU named after K. I. Satpaev at the Department of "Architecture". For 12 years she was a senior adviser of the Department, now she is an adviser of the 3rd year. During her work at the University, she has published more than 70 methodological developments and scientific publications.

Awarded a "letter of Thanks" for high academic requirements at the end of the 2018-2019 academic year (Satbayev University) She was awarded the jubilee medal "85 years of KazNRTU named after K. I. Satpayev" 12.04.2019, he was Awarded the medal named after T. K. Bassenov" for contribution to the development of architectural education in the Republic of Kazakhstan" of the Kazakhstan Academic Center of the International Academy of Architecture (KazMAAM).2019.

KazPI named after Abay, Art and graphic faculty of Almaty 1978.

Prepared and organized an exhibition of the best student works of students of the 3rd year majors "design" and "Architecture" in painting "Inspiration" and "Emotional Art" - April 2017; (after this exhibition, she was interviewed, which was published on the University's website in September 2017).

Students of the 2nd year under the guidance took part in the competition for an alternative Christmas tree "ELKINK" from " INK Architects "and took 2nd place (a cash prize of 120,000 tenge and a certificate for training in"INK Architects".(published on the University's website).December 2017.

During the winter holidays, with the support of the Director of "IAC" Kuspangaliev B. U. held a practice on drawing and painting with a group of 2nd year students. (December 2017) Information and photos from the trip to Baku are posted on the University's website.(January 2018)

She has signed an agreement with the Azerbaijan University of architecture and construction to train our students in Baku. (December 2017)

Performed work on the design of the halls of celebrations in the style of "Dolce and Gabbana" by order of the company "Very Strange Entwrtainment "(may 2017.)

Participation in the development of the design project for the corridor on the 4th floor of the University and office number 407 .

Student guidance on the execution of the project design of the corridor and office number 407 in the University.(may 2018.)

1 "Urban sketching and entourage" by D. A. Miller.N. Urchinbackup. K. I. Tyurebaeva (proceedings of the international Satpayev readings "the Scientific heritage of Shahmardan Yessenov", Almaty 2017.)

2 "Black and white in art and architecture V. O Kolesnikov., K. I. Tyurebayeva (Satpayev readings, conference "Innovative solutions to traditional problems: engineering and technology" 12.04.2018) "Graphics and sketch drawings". K. I. Tyurebaeva (exhibition of the best works of teachers in KazNRTU named after Satbayev, 2017.)

6 Certificate for the organization of the exhibition and competition of architectural drawing in the framework of the International innovation Forum " Digital Kazakhstan: Sustainable development of urban planning systems in the 21st century.