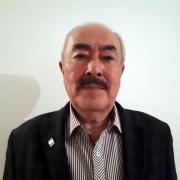 Yessenov Hvaydolla Ivanovich in 1974 graduated from the Agricultural Mechanization College - Department of Industrial and Civil Construction in Marx; in 1982, Saratov Polytechnic Institute with a degree in architecture; in 2012 he received the scientific steppe candidate of architecture.

In the academic environment, Khvaidolla Ivanovich has been successfully working since 2014: teaching the disciplines of architectural and urban planning, supervising bachelor's degree theses and master's theses at the IOC (KazGASA Campus), and then at Satbayev University.

In addition to a significant number of residential and public facilities, Khvaidolla Ivanovich is one of the authors of the development of concepts for the development of master plans for the estimated time frame for the cities of Almaty, Bishkek and Pavlodar. Conducted work on approbation of the town planning cadastre in Taraz.

1. The project of the trade fair complex in the microdistrict. Ainabulak (in Almaty).

2. Project of urban planning units for the development of st. Mailin (front sweep along its entire length with the transition to B. Khmelnitsky St. and Suyunbai Ave.) in Almaty.

3. Adjustment of the administrative and public center of the microdistrict. Ainabulak.

4. Adjustment of the forecourt area of ​​the railway station Almaty-1 (in Almaty).

5. Project "Organization of the territory of Lake Sairan (eastern shore)" in Almaty.

6. Project of detailed planning of the recreation area "Airport Lake" (in Almaty).

7. Planning project for the central and historical part of Almaty.

12. Planning project of Abai Ave. in the area of ​​Sairan Lake (in Almaty).

14. Projects of a number of large urban development centers along Raiymbek ave. From the complex "Vernenskaya fortress" to st. Mukanov, including the station square of the Almaty-2 railway station (which were included in the concept of the historical center of Almaty).

16. Project "Avenue Abay: from the Palace of the Republic to st. Mukanov "(in Almaty).

18. Proposals for the development of the New Square and the adjacent territory (by order of the Akimat of Almaty).

19. The concept of reconstruction of microdistricts 1-12 in Almaty.

20. The project of the planning of the town-planning unit from the street Rozybakiev - Abai ave. To Sairan lake (in Almaty).

21. Planning project of a town-planning unit in the area of ​​Abay avenue - st. Momyshuly (in Almaty).

22. Project for planning and improvement of valley complexes of small rivers (Bolshaya and Malaya Almatinka, Esentai) in Almaty and the BAK right-of-way.

23. Planning project of the territory of Almaty within the boundaries: st. Auezov - st. Tole bi - st. Zhandosova - b. Esentai.

24. Planning project of a residential area within the boundaries of: Ryskulov Ave. - Raiymbek Ave. - Rozybakiev in Almaty.

26. Planning project of the territory of Almaty within the boundaries: st. Bokeikhanov, Terenkara river bed, north of st. Ryskulov to the item Karasu.

27. Project of planning of the territory of Almaty within the boundaries: st. Zhandosov - Timiryazeva street - r. Esentai.

30. Project of detailed planning of the territory of the Bolshaya Almatinka river tract in Almaty.

33. Planning project for the territory of Almaty within the boundaries of Seifullin Avenue - Ryskulov Avenue - Suyunbay Avenue - Sholokhov (500 hectares).

34. Planning project of the territory of Almaty within the boundaries: Ryskulov ave. - Suyunbay ave. - Khmelnitsky - the western border of the KazPAS ponds - r. Malaya Almatinka (500 ha).

35. Project of planning of the territory of Almaty city within the boundaries of st. Rozybakiev - st. Zhandosova - b. Big Almaty - st. Satpayev.

38. Development of master plans, combined with projects of detailed plans of 11 settlements of the Almaty region with the organization of functional zones and a plan of regulations for an urban planning cadastre (contract).

39. Adjustment of the General plan of Pavlodar city (estimated period until 2032).

40. The concept of perspective development of Almaty.

8. Effective use and development of railway stations and landside area (co-author S.F.Sabitova). // Student and Science: Looking into the Future: Collection of Materials of the XVII Annual Republican Scientific Student Conference. Part I. - Almaty: KazGASA, 2017 .-- S. 129-131.

9. Reconstruction with further adaptation of the historical and architectural ensemble in the development of the general plan of Pavlodar. // Rehabilitation of a citizen's living space: XIII International Scientific and Practical Conference named after V. Tatlin. - Penza, 2017 .-- S. 66-68. ISBN 978-5-9282-1451-7

10. Modern trends in the formation of urban parks in the riverine zone (co-author Tairova GM). // Student and Science: Looking into the Future: Collection of Materials of the XVI Annual Republican Scientific Student Conference. Part I. - Almaty: KazGASA, 2016 .-- S. 158-162.

11. Review of foreign experience in the design of sports facilities in the world (co-author Nasenov A.K.). // Young Scientist: Challenges and Prospects: Collection of Materials of the IV International Scientific and Practical Conference No. 2 (4). - Moscow: publishing house "Internauka", 2016. - pp. 35-39.

13. Cadastre as the basis for the regulation of territorial activities. // Actual problems of natural sciences: Collection of materials of the International scientific and methodological conference. - Almaty, 2010. - P.173-175.

17. Modern problems of the life of cities and the main methods of urban planning regulation of their development (co-author Koishanbaev NM). // Preservation and Promotion of Historical and Cultural Heritage: Collection of Materials of the Scientific Conference. - Baku, 2010.

18. The role and importance of the urban planning cadastre in the information and legal system of the city. // Creative heritage of T.K. Basenova, M.M. Mendikulova and topical problems of architecture: Collection of materials of the republican scientific-practical conference. - Almaty, 2009 .-- S. 49-51.

Architectural and spatial organization of the urban landscape

Architectural design of buildings and structures