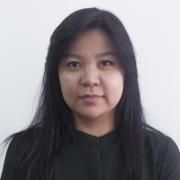 Responsible for educational work, for conducting the “English week” event and I am the head of the advisers of the English language department.