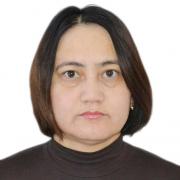 After graduation, she was sent to the Kazakh Academy of Transport and Communication, where she worked as a trainee teacher, assistant in the department of "Electrification and Power Supply".

In 2006, she entered the graduate school of Moscow State University of Railway Engineering.

On June 3, 2010, she defended her thesis on the topic “The Problem of Using Renewable Energy Sources in the Traction Power Supply System”, specialty 05.14.02 “Power Plants and Electric Power Systems” at the Dissertation Council D218.005.02 at Moscow State University of Railway Engineering.

From 2010 - 2016 she worked as a senior lecturer at the Department of Power Engineering at the Kazakh Academy of Transport and Communication named after M. Tynyshpaeva.

Since 2016 she has been working at the Kazakh National Research Technical University named after K.I. Satpayeva is an assistant professor.

2. 2006-2010. Moscow State University of Railway Engineering, full-time postgraduate study, Russian Federation, Moscow, specialty: 05.14.02- “Power plants and electric power systems”, a scientific degree was awarded - candidate of technical sciences (Minutes No. 33k / 49 of 09/17/2010) . Nostrification in the Republic of Kazakhstan of the candidate of technical sciences protocol No. 7 of October 25, 2011.

1. Application for participation in a competition for grant financing for young scientists for the implementation of scientific research on scientific and (or) scientific and technical projects for 2020-2022 on the theme "Development of an energy-saving traction power supply system for railways using renewable energy sources"

2. A report has been submitted on the initiative work at the NSTEH on the topic "Research on ways to increase the energy efficiency of wind turbines"