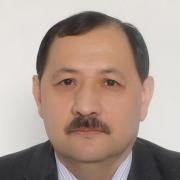 Doctor of geological and mineralogical sciences

Being a member of the “Institute of Geology and Geophysics” (Uzbekistan Academy of Sciences) I studied the deep structure, geological evolution, petrographic composition and rheological properties of the consolidated crust in Central Asia, Kazakhstan and adjacent regions, as well as investigated the impact of consolidated crust on the geological structure, evolution and hydrocarbon potential of the sedimentary cover at these regions (Engineer, Senior Engineer, Junior Researcher, Researcher in 1987-1991; Head of Laboratory "Structures of lithosphere" in 2002 - 2003 (combined duties)). For a number of years (1997-2003) I was a member of the Expert Council under the State Committee on Science and Technology of Uzbekistan, and an Expert at the Higher Attestation Commission at the Academy of Sciences of Uzbekistan (combined duties). I have experience in seismic data acquisition (1980 - 1984) while working as Assistant Geophysicist, Geophysicist in “UzbekGeophysica" (State Production Company, Uzbekistan) in Ustyurt region. In 1984-1986, I was a PhD student of the “Institute of Earth Physics, Academy Sciences of the USSR” (Moscow). I am a member of the SPE, SEG, and local scientific communities, the author/co-author of more than 200 scientific and technical publications, reports, two monographs, annual overviews and analytical applications for geology, geophysics and production by regions of work. I regularly take part in the annual technical Schlumberger symposiums and SPE conferences, including preparation of articles and presentations. Fluent in Russian, English, Kazakh and Uzbek languages. Computer skills - Windows (Word, Excel, Power Point). Available certificates – Islamabad Training Institute, Petrel Geological Modeling (advanced), MMRD (ISIS), TECHLOG, SFEP (Sales for Experienced Professional), PSQL and Play-to-Prospect. Periodically lectured on topical areas of Petroleum Geology for various segments within Schlumberger, as well as for students of local universities (Astrakhan, Almaty, and Tashkent). Organization of scientific and technical conferences for students.Training and mentoring of newcomers and other specialists. Reviews of dissertation abstracts for the degree of candidate (PhD for Geology) and doctor of geological and mineralogical sciences. In 1996-1998, worked as a Senior Lecturer at Tashkent State University (part-time). Job instructor Schlumberger NExT program; lectures designed for the Russian audience: "Applied geology of oil and gas", "Seismic Fundamentals", "Structural Geology" for external Customers and internal for Schlumberger staff. According to published literature, internet, materials of conferences, symposiums and other communication channels I regularly perform monitoring for new technologies, methods, techniques and geophysical tools in the exploration and production of hydrocarbons in sedimentary basins with different geological structure, as well as for publications that reflect new information on the lithology, tectonics, reservoir properties, oil and gas potential, thermodynamics and other reservoir characteristics concerning geological exploration, oil and gas production on fields in the petroleum basins of Central Asia , Kazakhstan, Russia and adjacent states.

1. “Reconstruction of drainage channel No. 1 with vertical drainage at the tailing pond of the tailings storage workshop of the Balkhash enrichment plant”

2. “Scientific and technical support for design work on geological and hydrodynamic modeling, calculation and balancing of each mine in the contract area of ​​ArcelorMittal Temirtau JSC, development of a feasibility study for ground-based infrastructure for the extraction and processing of coal methane”

Abetov, A. Niyazova, A. Saurikov, Z. 3d modeling of euler’s points for geodensity and geomagnetic models of north ustyurt region in geosoft oasis montaj. News of the National Academy of Sciences of the Republic of Kazakhstan, Series of Geology and Technical Sciences. 2017 | journal-article