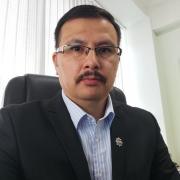 Candidate of Geological and Mineralogical Sciences

Department of "Geological survey, search and exploration of mineral deposits"

The Associate professor of the department of "Geological survey, search and exploration of mineral deposits" of the Institute of Geology and petroleum engineering, a candidate of geological and mineralogical sciences and an academician of the International Academy of Informatization (IAI). Corresponding member of the National Academy of Mining Sciences of the Republic of Kazakhstan and corresponding member of the Academy of Mineral Resources of the Republic of Kazakhstan (AMR RK). The supervisor of the two and the executor of a number of fundamental and grant research projects.

Qualification: a mining engineer-geologist and a teacher with 18 years of experience. Winner of the state scientific scholarship for talented young scientists in 2008 - 2010.

Has begun his pedagogical activity in 2004 as an assistant at the “Geological Survey, Prospecting and Exploration of Mineral Deposits” department of the Satbayev University. Continued on to work as a lecturer from 2006 to 2008, a senior lecturer from 2008 to 2011, a docent from 2011 to 2016, and works as an associate professor of the department from 2016 to present. Meanwhile, has held the post of deputy director of the K.Turysov Geological Exploration Institute for educational and methodical work of the Satbayev University from 2004 to 2008. Besides, has been working part-time as a researcher since 2007 and as a senior researcher at the “Geological and Ore Formations Scientific Group” since 2011. From September 2019 to September 2022, he held the position of Deputy Director of the Institute of Geology and petroleum engineering of Satbayev University.

1. Member of the expert group on educational programs of the Department of Higher and Postgraduate Education of the Ministry of Education and Science of the Republic of Kazakhstan in the direction of geology.

2. Member of the dissertation council at the Karaganda State Technical university for the presentation of PhD doctoral dissertations in 6D070700 "Mining” and 6D070600 "Geology and exploration of mineral deposits" fields.

3. Member of the expert group "Association of Production Geological Organizations of the Republic of Kazakhstan" on the development of the sectoral framework of qualifications and professional standards in the field of geology.

4. Acamedician of the International Academy of Informatization (IAI).

5. Corresponding member of the National Academy of Mining Sciences of the Republic of Kazakhstan.

6. Corresponding member of the Academy of Mineral Resources of the Republic of Kazakhstan (AMR RK).

- In 2021, he was awarded the badge "Excellent Student of Subsurface Exploration" of the Ministry of Ecology, Geology and Natural Resources of the Republic of Kazakhstan.

- In 2022, on the Day of Science of the Republic of Kazakhstan, he was awarded the Gold Medal of KazNRTU named after K.I. Satbayev.

3) 2010: presentation of the thesis on “Copper-porphyry mineralization of the Late Paleozoic volcanic-plutonic belts of the Zhongar-Balkhash folded region”. Academic degree - candidate of geological and mineralogical sciences.

While working at Satbayev University, Y.K.Arshamov is as a actively involved as scientific adviser and an executor (senior researcher) in carrying out fundamental and funded research projects. He participated in the following research projects:

1. “The geodynamic evolution of the Kendyktas-Zaili region from the perspective of modern mobilism and the metallogenic analysis of its ore-bearing structures” (2006-2008);

2. “Development of models for the formation of deposits and scientifically based criteria for the industrial evaluation of ferrous, non-ferrous and noble metals” (2009-2011);

3. “Identification of  stratigraphic, tectonic, magmatic, lithological and geodynamic criterias of ore-bearing structures to build geodynamic models of the development of Kazakhstan” (2009-2011);

4. “Compilation of large-scale forecast maps, sections of diagrams and summarizing reporting materials in order to select objects for prospecting and evaluation work on important ore nodes” (2012-2014);

5. “Analysis of the epithermal gold-silver mineralization of the Zhongar-Balkhash region and the identification of promising areas for the discovery of large deposits of a new type” (2012-2014);

6. «Identification of promising areas of prospecting for mineral deposits based on new data on the patterns of their manifestations in the paleozoids of Kazakhstan ” (2015-2017).

7.“Studying the ore content of ring structures in Central and Southern   Kazakhstan   and identifying among them the most promising for setting up exploratory works” (2018-2020).

8. “Identification of prospective areas of large-volume epithermal gold-silver deposits of lean ores in the volcano-plutonic belts of Kazakhstan” (2021-2023).

Has been was the supervisor of a grant research project of the Ministry of Education and Science of the Republic of Kazakhstan on the topic "Reassessment of industrial prospects of copper-porphyry mineralization of continental volcanic-plutonic belts (devonian and late paleozoic) of Kazakhstan in the light of modern geodynamic concepts" from 2015 to 2017.

Currently he is the scientific leader of the research project on the topic “The influence of fault-fault tectonics within the Aktogay deposit on the change in the mineral composition of copper-porphyry mineralization” for 2018-2019. This scientific project is funded by “KAZ Minerals Aktogay” LLP.

Over the past five years, the main results of scientific research and educational work of Y.K.Arshamov, whether co-authored or written individually, have been published in 46 works, including 5 study guides and a number of educational programs and curricula in the specialty of "Geology and Exploration of Mineral Deposits". 10 of the scientific articles and reports published in journals and scientific conferences are indexed in the Scopus database. Scientific articles and abstracts have been published abroad and in publications across the state, including those recommended by the Monitoring Committee for Control in the Sphere of Education and Science of the Ministry of Education and Science of the Republic of Kazakhstan.

3. A.Mendygaliyev, Yа.Arshamov, V.Selezneva, E.Yazikov, A.Bekbotayeva  (2021). Prospects for application of multi-spectral earth sensing data in forecasting and searching for reservoir-infiltration uranium deposits. News of the National Academy of Sciences of the Republic of Kazakhstan, Series of Geology and Technical Sciences 2(466), p. 90-97.

6. Aksholakov E.B., Sharapatov A., Togizov K.S., Arshamov Ya.K. (2017). Zhitikara ore district: Minerals and ores of rare earths and their prospects of studying logging methods. News of the National Academy of Sciences of the Republic of Kazakhstan, Series of Geology and Technical Sciences 1(421), p. 79-86.

1. Geology and metallogeny of the Devonian volcano-plutonic belt and its prospects.

2. Prospects for copper content and assessment of industrial prospects for ore occurrences in volcano-plutonic belts

3. Geological-structural and tectonic features of the Aktogay ore area and prospects for copper-porphyry mineralization.