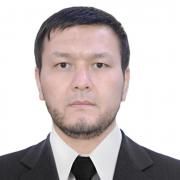 After graduating from the Bachelor's program from 08.2005 to 10.2005, he worked as an electrician of the contact network at the Tashkent Power Supply Distance.

Since 08.2007, he began teaching activities as an assistant at the Tashkent Institute of Railway Engineers at the Department of Power Supply and Microprocessor Control.

After successfully defending his candidate dissertation on the topic - «Galvanomagnetic sensors of high currents for monitoring and control systems» on a specialty 05.13.05 – «Elements and devices of computer facilities and control systems» in 04.2012 was awarded the degree "Candidate of Technical Science".

In 10.2013, he continued to work at the Kazakh National Technical University named after K.I. Satpayev as a teacher at the Department of Electric Power and Automation of Technological Complexes. Since 09.2014 he was transferred to the post of senior teacher.

In 12.2014, the Committee for the Control of Education and Science under the Ministry of Education and Science of the Republic of Kazakhstan recognized the equivalence of the scientific degree of “Candidate of technical sciences” and awarded the scientific degree – Doctor of Philosophy (PhD) in specialty 6D075100 - Informatics, Computer Engineering and Control.

In 03.2018 he was transferred to the post of senior lecturer at the Department of Power Engineering.

Since 08.2019, he continues to work at Satbayev University as an Assistant Professor at the Department of Power Engineering.

He conducts research masters and doctoral in the following areas:

1) Improving the control and measuring devices of control systems and technological processes;

2) Research of energy-saving technologies for the transmission of electric energy over long distances;

4) Improving the quality of electrical energy in electrical networks.

He participated in the following research projects: