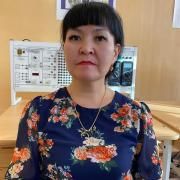 I, Kuttybaeva Ainur Ermekkalievna was born on February 24, 1975 in the village of Zhumisker, Karaganda region. Mother - Abdrakhmanova Tiyshtyk, was a cook in Shokle-boarding school, father is a machine operator in the village. I have 3 brothers and 1 older sister.

She graduated from high school named after Abay. She studied well, participated in olympiads in mathematics and biology. She went in for sports in basketball and volleyball.

After graduating from school in 1991, she entered the Kazakh National Technical University named after K.I.Satpayev in the Faculty of Information and Computer Engineering. 1996 graduated with a degree in systems engineer. In September 1996, she got a job in the Department of Informatics of the Kazakh Research Institute of Agricultural Economics. In 2000-2004 studied at the graduate school of the correspondence department of this research institute. In 2009 she defended her thesis for the degree of candidate of economic sciences, specialty 08/08/05 - Economics and National Economy Management.

I have three children: Koblanov Syrym Rashidovich - a pupil of the 2nd grade of school-lyceum No. 169 of Almaty. Koblan Azamat Rashidұly, Koblan Arai Rashidızy - 3 years old, twins. Husband - Bekniyazov Rashid. We live in the Shanyrak-1 microdistrict of Almaty. Since 2006 I have been working at the Department of Radio Engineering, Electronics and Telecommunications of KazNTU named after Satpayev as a lecturer. At the department I conduct classes on the discipline Fiber-optic systems in telecommunication and Multichannel telecommunication systems. I am a senior adviser in the department and responsible for the mutual visits of teachers and student placement. On August 20, 2014 she was elected a full member of the International Academy of Informatization.

6)  Increase of information transfer capacity of fiber-optic channels and communication lines. The Third International Scientific and Practical Conference “Status, Problems and Tasks of Informatization in Kazakhstan” is dedicated to the 80th anniversary of KazNTU named after K.I.Satpayev and the 20th anniversary of MAIN on November 20-22, 2014 Almaty KazNTU named after Satpayev;