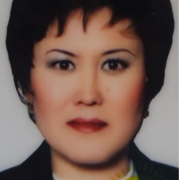 Since 1981, she began her career at the Department of computer science as a laboratory assistant.

In January 1995, on a competitive basis, she was transferred to the position of a teacher.

In January 2001, she was transferred to the position of head of the computer documentation Department of the educational and methodological Department.

From 2005 to 2010, she worked as head of the practice and employment Department at the Career center.

from 2010 to 2011, she worked as a senior lecturer at the Department of General and theoretical physics At the Institute of high-tech engineering

Supervised the practical training of students majoring in "Technical physics" and "Heat power engineering". She was a senior adviser at the Department.

In 2011-2013, she worked as the Deputy Director of the Institute of high technologies and sustainable development for educational work. For conscientious work was awarded with the Medal "for valorous labor enbegi ushin" diplomas.

From 2013-2016 - worked as a senior lecturer at the Department of General and theoretical physics of the Institute of high-tech engineering.

From 2016-2018, she worked as the head of the laboratory of the Department of Engineering physics.

Since July 1, 2018, I have been working as a leading engineer of the Department Of engineering physics at Imiip.

Total experience-40 years, and in KazNTU named after K. I. Satpayev is 39.

Mustafina Kulayym Kabdulgalievna, was born on November 16, 1962 in the North Kazakhstan region, Kazakhstan.

From 2011 to 2013- I studied at the master's degree program of the Almaty University of Humanities and technology, majoring in 6M070300-Information systems. upon graduation, I was awarded the academic degree "Master of technical Sciences".