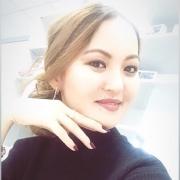 Since August 2020, she has been working at Satbayev University.

In 2015, she graduated with honors from the Al-Farabi Kazakh National University speciality in 5B011700-Kazakh language and literature.

In the same year she entered the magistracy at Al-Farabi KazNU. In 2017 she defended her master's thesis "The language picture of" smiles "in communication" in the specialty "6M020500-Philology".

Functions of communication forms of sentences / "Rational experience of forming the skills of speaking in the Kazakh language and learning the professional language" (Kazakh National Medical University named after S.D. Asfendiyarov2018, P. 75-78.

Ways of development of intonational features of children of preschool age/«Vestnik of KazNU» (series of philological),  2020, №1, P.93-100.