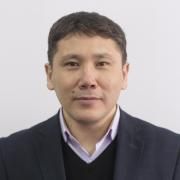 Since June 2016, he has been the head of the Department of Kazakh and Russian languages at Satbayev University.

2015-2017 Participation in the project "Creation of the national corpus of the Kazakh language".

2012-2014 Participation in the preparation of a 30-volume Kazakh-Russian, Russian-Kazakh terminological dictionary, which has been included in the action plan for the state program "Functioning and development of languages" (2011-2020).

Russian-English-Kazakh dictionary of geological terms. - Almaty: Kazak tili, 2019 (one of the authors).

Lexicography of dialect vocabulary in the explanatory dictionary of the Kazakh language. - Actual problems of dialectology of languages of the peoples of Russia: Materials of the XVIII all-Russian scientific conference (with international participation). Ufa: IIAL UNC RAS, 2018. ISBN 978-5-91608-169-5/ Pages 110-116. co-authored.

On the lexical and semantic method of formation of new terms in the field of Geology. - "Preservation and development of native languages in a multinational state: problems and prospects" / / Proceedings of the IX International scientific and practical conference-Kazan Federal University. Kazan, Russia. 11-13. 10. 18. page co-authored.

Mathematical terms in the textbook of A. Ermekov "Courses of higher mathematics" // Journal "Terminological Bulletin". No. 2, 2014.

Қазақ сөздігі (Large one-volume explanatory dictionary of the Kazakh language). - Almaty: Dauir, 2013 (one of the compilers).

In 2001, he defended his PhD thesis in the specialty 10.02.02-Kazakh language on the topic "Comparative study of phonetic-areal features in the language of the Kazakh Diaspora in Mongolia".

1998-2001 higher education: National Academy of Sciences of the Republic of Kazakhstan Institute of linguistics named after A. Baitursynov, full-time postgraduate study.