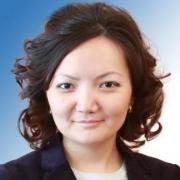 From September 2013 to the present teacher of the department "Foreign languages".

From 2016-2017 –Institute of Basic Education after Akzhan Mashani , Deputy Director for Educational and Methodological Work

From 2008-2011 – Center for International Accreditation, Head of the Internal Evaluation Department

2003 – 2005 – Military Department at the Kazakh University of International Relations and World Languages after Abylai Khan, specialty: military translator, awarded the rank of lieutenant.