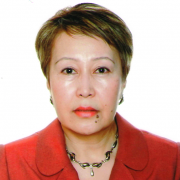 I am an author of more than 40 scientific articles, scientific monographs, textbooks, bilingual and trilingual technical dictionaries, educational and methodical works. My scientific interests include studying the problems of General linguistics, Turkic and Germanic languages, lexicology, compiling bilingual and explanatory dictionaries.

For deserts in the field of scientific, pedagogical and organizational activities I was awarded with the international medal "For Merits in Education" after Y. Komensky,

the medal of the Kazakh National Research Technical University named after K. Satbayev "For Special Merits", Honorary certificates of the university, subordinate ministries and  the Certificate of Honor of  the Akim of Almaty city, Mr. A.Yesimov, the medal on the occasion of the 120th anniversary of the great scientist K.I. Satbayev and the 85year anniversary of Satbaev University.

G.Dzh. Azhibekova conducts a large research and educational work. Her research interests include studying the problems of general linguistics, the problems of Turkic and Germanic languages, lexicology, compiling bilingual and trilingual technical and explanatory dictionaries.

1. From 1969 till 1973 - Alma-Ata Pedagogical Institute of Foreign Languages, Faculty of the English Language, specialty - English, qualification - English teacher, No. 371165.

3. From 1976 till 1980 - Alma-Ata Pedagogical Institute of Foreign Languages, a graduate student of a full-time postgraduate study.

4. In 1983 I defended my thesis for an Academic degree of a Candidate of Philological Sciences.

6. From 1993 till 1994 - Kazakh State University of World Languages, Faculty of Continuing Education Program student, No. 4-A.